[Written by Elizabeth May]

Last night was my last community meeting for January.  Today I head back to Ottawa for the resumption of Parliament.  Despite a round of significant winter storms, we only had to cancel one of the nine planned gatherings. We will be holding Saturna Island’s meeting in February and we have added another meeting for Sidney as well as so few people were able to make it as the snow kept falling.

I love that in Saanich-Gulf Islands my constituents, at least those coming out for community meetings, are so concerned about the on-going conflict in Wet’suwet’en territory. Overwhelmingly, those who spoke about the situation stand in support of the Wet’suwet’en hereditary chiefs.

It is a source of outrage to many that Premier Horgan has refused to meet the hereditary leadership of the Wet’suwet’en, stating that he respects the “rule of law,” as though the hereditary chiefs do not.

In fact, if anything, there are competing laws.  On the side of the Wet’suwet’en hereditary chiefs stands thousands of years of indigenous government and indigenous law. The legitimacy of their hereditary system of governance has been upheld by the Supreme Court of Canada.  In a joint letter to the Prime Minister and Premier Horgan from dozens of indigenous and non-indigenous lawyers and academics, the matter is put bluntly:

“Anyone unsure who to speak to, Indian Act Chief & Councils or the Wet’suwet’en hereditary Chiefs, needed to do no more than take a quick look at the first page of the Supreme Court of Canada’s Delgamuukw decision.” 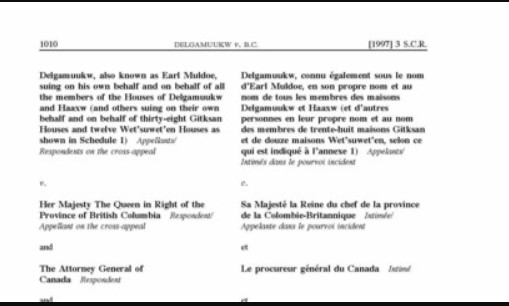 “The plaintiffs were the hereditary Chiefs of the Gitxsan and Wet’suwet’en Houses–not an Indian Act Chief & Council to be seen.”

“If there was still any confusion, a simple scan of the BC Court of Appeal decision in Tsilhqot’in should have cleared things up.”

“The Court held that the determination of who properly holds Aboriginal title is determined primarily from the view point of the Indigenous People making the claim—not the imposition of the Indian Act.”

I have been so frustrated by most media coverage of the stand-off. It is nearly universally suggested that the Indian Act Chief and Council have greater legitimacy — because they are elected.  The hereditary chiefs are treated as though they are some sort of extreme hippie cult. The legitimacy of their constitutional role has not been explained. The Wet’suwet’en have seen that the Chief and council make the decisions about the reserve area, dealings with government on issues of housing, water and infrastructure.  The hereditary chiefs maintained the role of protectors of the larger territory.

In standing against the injunction, the hereditary chiefs are well within their Constitutional rights under s.35. In addition, the United Nations Declaration on the Rights of Indigenous Peoples strengthens their rights.

Set against these court decisions stands the injunction granted to Coastal GasLink.  Injunction law is its own area of judicial exercise of discretion. In a conflict over an injunction to stop anyone from interfering with rights, the general question is which side holds the balance of convenience.  A multimillion dollar corporation will have an easier time persuading a court that getting a project underway is far more often given to corporations than to protesters. In fact, research in the National Observer has documented that corporations are granted injunctions more than 80% of the time while indigenous peoples are granted an injunction less than 20% of the time. https://www.nationalobserver.com/2019/11/08/features/courts-deny-most-first-nations-injunctions

Thinking back to my arrest in March 2018, what I was doing – standing in front of Kinder Morgan’s gate in Burnaby – was not illegal in the sense that it broke any provision of the Criminal Code.  Pleading guilty did not result in a criminal record. If Kinder Morgan had not picked up the phone to ask for us to be removed, the RCMP would have let us be. Injunction law essentially converts our peace officers from police serving the public interest to private security. Neither one has a clear claim to respecting “the rule of law.”  Elements of law are on both sides. The fact that it has come to a point of conflict is due to a failure of political leadership.

I am so proud of my MLA, interim BC Green leader Adam Olsen and my federal colleague MP Paul Manly for respectfully entering into dialogue with the Wet’suwet’en on their territory. Paul reported something I had never heard – that the hereditary chiefs had offered an alternative route to avoid the most sensitive ecological and cultural areas. Their offer was rejected. This fact is documented in the injunction decision.
https://www.oktlaw.com/the-b-c-supreme-courts-decision-in-coastal-gaslink-a-missed-opportunity-to-provide-instruction-on-exclusivity-and-consent/

We will continue to argue for the RCMP to stand down to allow talks to take place.  Please support these calls to de-escalate the tensions and eliminate the threat of violence.

Meanwhile, on a completely different topic, Greens are mobilizing and preparing for a leadership contest and a period of growth and renewal. Over the next 20 days or so, Greens across the country will be invited to engage in producing a vision statement to set the stage for a successful leadership convention.  If you are interested in participating, please email me.

With love and hope,